Death Note is the most prolific and popular show in the anime world; it is also the anime that I saved to watch until very recently. What really made me intrigued was the blurb — a book that kills any person whose name you write in it? Those lucky buggers who have names with symbols and a crazy concoction of letters will be the safest ones! 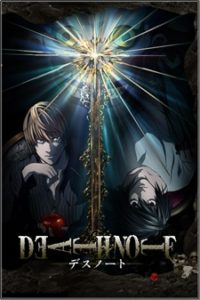 Light Yagami, the main character of Death Note, is a high school student who is too smart for the classes that he is in and doesn’t seem to enjoy the life he is living. We instantly see a change in character when he gains control of a magical book and he becomes more confident with the views he had always kept inside. Now that he has the means of taking action, we can see how his true personality flourishes.

His only challenger comes by the name of ‘L,’ a police investigator. ‘L’ is adamant to find the cause of the surge in mysterious deaths. This is a problem for Light as ‘L’ uses an alias, making it impossible for Light to use the notebook to kill him. Both characters share a dynamic conflict where they try to outsmart each other, challenging each other’s wits, giving the reader the impression that they are more similar than different.

• Story
A book that gives the main character, Light Yagami, the power to kill anyone whose name he puts in it is the basic premise of Death Note. What makes the plot interesting is that, from beginning to the end, we as viewers don’t know which characters are “bad;” the show gives the viewer room to make his own interpretation. Light, going by the alias ‘Kira,’ uses the book for justice and to punish those who commit crimes. As this develops, ‘L’ is searching for the person that is mysteriously killing all the criminals of the city. The viewers are taken on a journey of cat and mouse where both characters think that they are one step ahead of the other, but their efforts only counter each other and end in stalemate.

What I did not like so much about Death Note was the abrupt ending which left me unfulfilled. I think it was a way for the producers of the show to cut it off before they completely ran out of ideas. I think that they could’ve done a little better, but each episode kept me glued to my seat. Like many others on the list, this is not your typical run-of-the-mill anime; this one is clever with a complex story and unexpected twists and turns.

• Should I watch Death Note in Dubbed or Subbed?
Having watched it in both, Japanese is best but English is also good with some notable voice actors in the mix — I leave the choice up to your preference.

Please bear in mind that I new to anime so I have not seen a lot of them. If your favourite is not on the list or you disagree with this list, then put your own opinions/ recommendations in the comment section, as well as my blog post here, as I would love to watch what you guys like to watch!

Until next time, See you when you’re older.
Don’t. Go. Changing.